Passing Down the Story of Mother Nurse 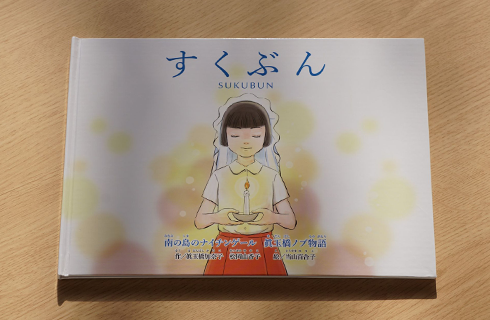 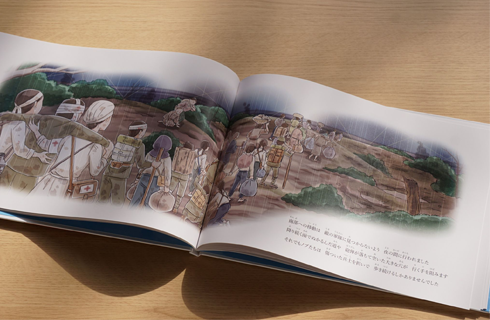 Nobu Madanbashi was a girl who aspired to become a nurse to help others during the war in Okinawa. To honor her life which she devoted to nursing and share her story and ideals, the picture book “ Sukubun (e-book)” was created and published on the official Mother Nurse website. Please enjoy getting to know Nobu Madanbashi through her story.

Donations received will be used to promote multilingual translation of the picture book “Sukubun” and the official website. We will also use them to gift the book (Japanese version), among other things.

Sharing the “Living History” of the War and Nursing

The old photographs and handwritten letters left behind by Nobu Madanbashi are valuable materials that tell the history of the war and nursing in Okinawa, and each one is filled with her sentiments. By experiencing the “living history” of the war and nursing through her experiences, we hope that you will deepen your understanding of not only the misery of war, but also the preciousness of life and the importance of peace, and above all, the nursing with which we are all so familiar. The lecture will feature a special screening of the 30th “Florence Nightingale Medal” award ceremony in 1985, where Nobu Madanbashi became the first person from Okinawa Prefecture to be chosen as the recipient of the world’s highest nursing honor. The lecture will be held in Japan only.

At the young age of 27, Nobu Madanbashi stood on the battlefield as the chief nurse of the military hospital and, filled with the spirit of Nightingale, devoted herself to caring for the sick and injured to the very end. Guided tours will take you through the southern part of the main island of Okinawa and retrace Nobu’s footsteps during the war as told in the “Sukubun” picture book, all while offering the reverential feel of a memorial service.
We will explain in detail the sentiments she quietly expressed for the victims, having experienced war on the front lines, as well as the unknown efforts of courageous young nurses.

*The content of the guided tour will be determined according to the number of people, the duration, fees and other requests.

Some donations will be used to cover operating expenses for lectures and guided tours of the battle sites.

Unraveling History and Passing Down the “Spirit of Nursing”

Okinawa was governed by the US military for 27 years before being returned to mainland Japan in 1972.
How did nursing in Okinawa develop during the turbulent postwar era, and what supported the spirits of the women who lived during that era?
In 1947, two years after the end of the war, “Okinawa Nightingale Tower” was built by Nobu and her friends using a broken airplane propeller and wheels to memorialize the nurses who were victims of the war. For a time, it was installed in the schoolyard of a nursing school. In addition, through the American-style nursing education that she received from her beloved teacher, Juanita Watterworth (U.S. military nursing adviser), Nobu trained many nursing instructors.
By examining the origins of Okinawan nursing and discovering its history, we would like to pass down the spirit of nursing cultivated in Okinawa with care. The results of the research projects conducted using donations will be converted into reports that are made public in upcoming planned exhibitions and on the official website and social media.

*The “Okinawa Nightingale Tower” is currently stored in the repository of the Okinawa Prefectural Museum and Art Museum.

Our Perspective on the History of the War

We nurture feelings of gratitude by storing up thoughts of the beauty of the island that sustained the hearts of our ancestors.

Over the course of the war in Okinawa and the long road to recovery, many unknown nurses worked behind the scenes and devoted themselves to caring for the sick and injured and praying for their health.
In the memoirs where they wrote about their experiences after the war, no matter how harsh and difficult the situation became, the colors of the flowers that bloomed around them and the natural beauty of Okinawa shone through, and this soothed my heart.”

The beauty of this island has continued to soothe people throughout the ages.

Color is created by illuminating the darkness with light. Just as color expresses beauty, shining light on the monochrome tones of the dark past and confronting history by superimposing this on our vibrant daily lives makes us feel closer to the ancestors who forged this peaceful era and makes us grateful for sharing this vital connection.

Conveying the History of These Beautiful Southern Islands to the World

Through the Story of Mother Nurse

Okinawa, which is blessed with a subtropical climate, is famous for being one of the world’s leading tourist destinations, but little is known about the history of its tourism, which began with a journey to honor the dead

Enjoying the beauty of the natural scenery and different cultures unique to the southern islands is the true pleasure of traveling to Okinawa, but perhaps sharing the sorrowful history hidden behind this beauty and reminding everyone of the preciousness of life is the “sukubun” (mission) that Okinawa should convey to the world, the essence of life that should be learned.

We believe that our generation, which has not experienced war, must convey the history of this beautiful island to the world while thinking about the future of our children.

And we should do so through the story of Nobu Madanbashi, who taught us the spirit of Mother Nurse.

To make a contribution to the Nobu Madanbashi Institute,
please apply upon agreeing to the confirmation items beforehand.

To make a contribution
to the Nobu Madanbashi Institute,
please apply upon agreeing
to the confirmation items beforehand.

Confirmation items
Contribution Amounts
Please enter a description
USD
(minimum 10＄)
Please enter a price
Please enter an Invoice ID
We will honor your name and message for many years to come.
Please be our patron and patroness.
The Meaning Behind Our Logo

The kanji character for “kan” in the Japanese word “kango” (nursing) consists of the character for “eye” underneath the character for “hand,” which conveys the image of shading one’s eyes with one’s hand to observe something. The design is based on the kanji “kan,” which indicates the fundamental approach of caring for others with affection and consideration, and this serves as the symbol of our project.

Our logo consists of the letters “M” and “N,” which serve both as an abbreviation of “Mother Nurse” and as the initials for Nobu Madanbashi. The right triangles symbolize triangular bandages and other types of medical dressing, and the navy blue color is inspired by the uniforms worn by nurses of the Red Cross.
Contributor Acknowledgement

I support the project. My late mother also respected Nobu Madanbashi. I wish you continued success.

I would like to offer my humble support to you.

I support your activities.

I endorse the objective of the project.

I support the purpose of the project. I am 80 years old and can never forget the Battle of Okinawa, which resulted in the death of so many people who served as a shield to protect the mainland. I believe this activity will heal the souls of the people of Okinawa and have a positive impact on our children and the future generation. I will be delighted if I can assist you in any way.

I support your activities. My best wishes for your success.
(Former vice governor of Okinawa Prefecture)